From Robert Griffin III to Nick Florence and Bryce Petty, it seems as though every QB to go through Art Briles’ system has produced outrageous video game-like numbers, particularly through the vertical passing game. For 4 years (2011-2014) Baylor didn’t drop outside the top 5 in passing yards. Yes, a large part of that success is due to the sheer-talent they had on the perimeter in players such as Kendall Wright and Corey Coleman, but they also utilized an extremely unique scheme to isolate and expose those match-ups in order to create possibly the most explosive passing game in the history of college football.

Avg QBR of Briles QB’s is 165.5, would be the fifth best QBR of 2017 QB’s.Tulsa and Missouri are currently teams that have employed ex Baylor assistants and use the Baylor style passing game. Both Drew Lock (Missouri), and Dane Evans (Tulsa) went from having mediocre numbers in traditional offenses to outstanding numbers in the Briles system.

Slot Choice: This was Baylor’s most called play, and can attack a wide variety of defenses. The concept is designed to occupy the corner in order to isolate the safety and allow the slot to work off his leverage with either a fade, stop or a bender.

Bender: If safety is off/outside; slot runs a bender. (usually vs. 2 high) 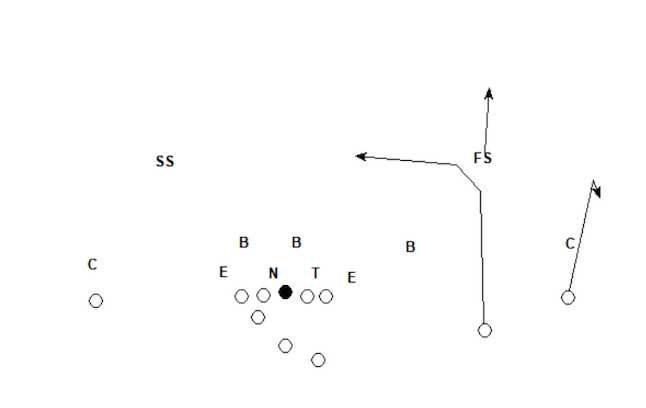 Vertical: Slot can run vertical if he is not capped. (usually vs cover 3)

Throw Outside: Occasionally the corner will drift into the slot’s vertical space attempting to rob the vertical. In this case, the QB can come off the slot and throw the stop route to the outside receiver. This is the only secondary read that is thrown in this series.

Single Choice: This is normally called when you think you have the single side receiver 1-on-1 because the safety is not in a position to help. On both Single and Outside Choice, the receiver will try to win vertically by either running a post or go based on leverage from the corner. Occasionally the receiver knows he can not win vertically so he will throttle down and run a stop. Also the receiver can run a slant if he sees the defense bringing pressure.

1 High: Against Baylor, a lot of teams run 1 high coverages, particularly cover 1. This leaves the backside receiver singled up with relatively little help. This is a good look to run Single Choice; however, the receiver has to be aware of the safety when running the post and cannot take it too far inside.

No Help: Often times against 20 personnel, quarters team will insert the backside safety into the box and leave the backside corner 1-on-1. Cody Alexander of matchquarters.com calls this coverage Four-Press (Sky). This is the ideal coverage to run Single Choice against, because the corner has no safety help. 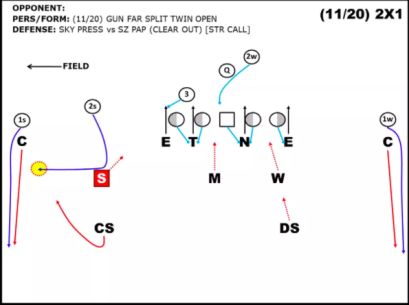 2 High: While usually not preferable, Single Choice can still be successful vs a true 2 high look (cover 2 or quarters). This is a good call for when you think the safety is playing up/ inside, or you can catch him flat footed with the play action. The receiver may have to adjust the angle of his route and stack the corner based on the safety’s positioning, and the QB may need to throw the receiver away from the safety against this look.

Stop: If the receiver realizes there is no way he can win vertically, he can run a stop.

Slant: If the defense blitzes to the side of the choice route, the receiver can run a slant.

Outside Choice: This call is used mostly when you think you can occupy the safety with the inside bender route in order to create a 1-on-1 matchup outside. (mostly vs. 2 high teams). This is pretty much the old Mills Concept except it gives more freedom for the receiver to adjust his route.

Quarters: Against quarters, the slot will almost always occupy the safety, so the outside receiver will have a lot of room to work vs. the corner.

Cover 2: The biggest advantage of Baylor’s Outside Choice rather than the Mills Concept is that against cover two, the outside receiver has the freedom to stack the corner, and stay away from the safety.

Stop: Once again, outside receivers have the freedom to sit down vs a hard bailing corner if there doesn’t look like there is any space deep.

Stack: Running Outside Choice from a stacked alignment is a great way to mess with coverage rules, and create match-ups.

Slot Choice Pogo: Baylor would often run double move off Slot Choice where the slot would lean to the post, then run a vertical. This is not a read but a called play.

Fin Tag: This tag simply tells the outside receiver on Slot Choice to run quick in. Versus 2-high coverages, the slot will likely run a bender creating a high-low stretch on the outside backer that is similar to the old levels concept. If the backer carries the bender, it opens up space for the fin, and if the backer jumps the fin, it opens up a window for the bender.

#1 Choice: The intent of this play (like Outside Choice) is to occupy the safeties, and let the #1 receiver work 1-on-1 against the corner with space.

#2 Choice: This is a lot like #2 slot Choice vs the majority of defenses. The fact that this is a 3×1 formation can also create some mismatches.

Nickel Matchup: This is a great call to make when you can get the defense to match your #2 receiver vertically with a nickel. One defense that gives you this matchup is a variation of quarters referred to as “Stubbie” in Nick Saban’s Alabama playbook. Also called “special” by Cody Alexander of matchquarters.com. The front side safety is responsible for #3 vertically, so the nickel is responsible for #2 vertically. The defense is essentially matching #2 and #3 the same way they would #1 and #2 to a 2 receiver side.

Against most defenses (man/ solo) this play will allow #2 to work against a safety, by occupying the corner with #1.

#3 Choice: This is a call that Baylor used whenever they expected tampa 2. The idea is to get the #3 receiver matched up on a dropping middle linebacker. This call can also be good vs. man defenses because it can get #3 matched up with a nickel/ linebacker.

If anyone has any questions or comments on the article, you can contact me by email at noahbriley@lclark.edu or on twitter at @noahriley21. Also, check out my book Breaking Down The 2018 Oklahoma Offense which is now available on Amazon.